Don’t let your savings ‘sink’ away due to a Sinkhole 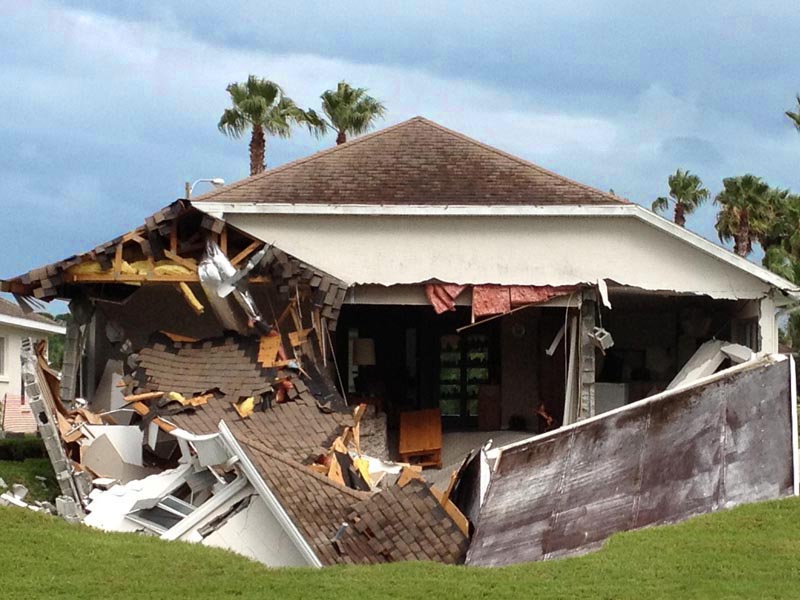 You can often find sinkhole coverage as an endorsement (sometimes called a rider) to a homeowners insurance policy, depending on your insurance company.

What Protection Does Sinkhole Insurance Offer?

Homeowners policies that cover only catastrophic ground collapse will cover the cost of damage only under the following conditions:

If your home is damaged by a sinkhole, but does not meet all four criteria, your insurance policy may not pay for the damage unless you have sinkhole coverage. Sinkhole coverage covers the circumstance where soil ravels into fractures created in underground limestone, causing a home’s foundation to settle unevenly. Sinkholes are generally not visibly apparent until you notice damage.

If You Have a Sinkhole Insurance Claim

If a portion of your home has shifted or sunk due to ground cover collapse, or if a sinkhole has appeared on your property, immediately take the following steps:

Mark the sinkhole or property with fencing, rope or tape to warn others of the danger. If someone is injured in the sinkhole, you could be liable.

Worried about loosing your house to a sinkhole? Don’t let your house, and savings slip away. Call us to learn more about Sinkhole coverage. #insurance

Be Aware of the Danger

Sinkholes are land forms created by the sinking of soil, sediment or rock as underlying layers are dissolved by groundwater. Sinkholes are most common where the rock below the surface is karst terrain, which includes limestone, gypsum and dolomite. About 20% of the U.S. land surface is karst.

As the rock dissolves, spaces and caverns develop underground. Sinkholes usually form very slowly and little change is noticed over time, but they can form suddenly when a collapse occurs.

There are three major types of sinkholes:

How to Spot Sinkholes

Sinkholes often develop gradually. If you live in a sinkhole-prone area, here are some signs to watch for:

When Purchasing a Home

If you’re interested in purchasing a home in area where sinkholes are a common occurrence, be sure to:

Contact CoverLink Insurance today if you have any questions about Sinkhole Insurance.